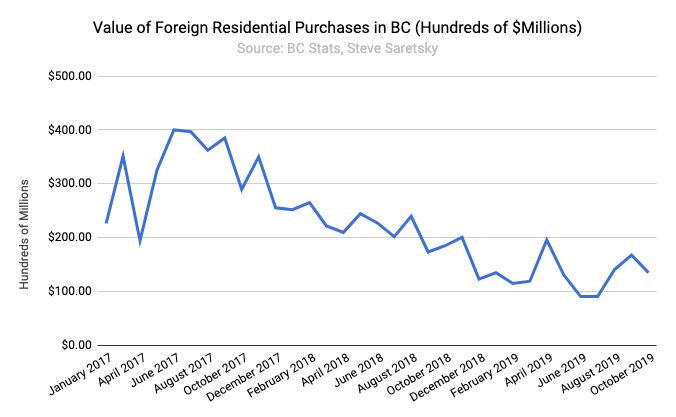 Per Bloomberg, The real estate market in downtown Los Angeles is taking a hit as Chinese cash dries up. Condo sales plunged 31% in the third quarter from a year earlier, according to data from appraiser Miller Samuel Inc. and brokerage Douglas Elliman Real Estate. Chinese buyers have made about 50% of the purchases in downtown Los Angeles in recent years, said Stephen Kotler, who oversees the western region for Douglas Elliman. But tightened restrictions on capital flowing out of China have hampered the market.

Without wealthy Chinese buyers, condos priced above $800,000 aren’t selling. Which has pushed average sales prices in Downtown LA lower after peaking out in 2018.

The news comes just one month after a report Beijing-based developer Oceanwide Holdings Co., halted construction on three high rise towers in Downtown LA following difficulties getting money out of China to complete the project.

Given the magnitude of Chinese capital that flooded global property markets, it’s time to revisit foreign purchasing activity here in British Columbia. As of October, property transfer tax data from the BC Government shows foreign buyers were involved in $135M of residential transactions across the province. That remains well below the cycle high of $400M in June of 2017.

That $135M represents just 1.87% of total transaction volume for the month of October. In other words, foreign buying has dropped off significantly over the past couple of years. Thus, it shouldn’t come as a surprise that luxury real estate in the city of Vancouver remains sluggish, despite the recent recovery in parts of the more affordable housing market.