Condo Prices and Multiple Offers Surge in the Suburbs

As the last bit of locals get squeezed out of the detached market the herd has reversed course, piling into the condo market. Supply zombies continue to claim a shortage of land and population increases as the driver behind historical price increases in Vancouver. But what about the Fraser Valley where there’s a plethora of land and thousands of new condo developments ready to be built at the drop of a hat?

Ironically, Fraser Valley condo prices have exploded more than any other area. Condos in Langley, Abbotsford and Surrey have increased by 25% or more year over year.

As per the MLS benchmark, condo prices in Langley have soared 33% year over year. In April 48% of condos sold over asking price, indicating house lust has reached epic proportions.

The irrational exuberance is even more glaring in Abbotsford where 36% of April condo sales went over asking price, and the benchmark price officially hit head scratching heights, increasing by 39% in one year.

And finally, Surrey condos, which have now gone vertical, up 27% year over year. Yes, a condo in Newton has officially become the best thing since sliced bread. 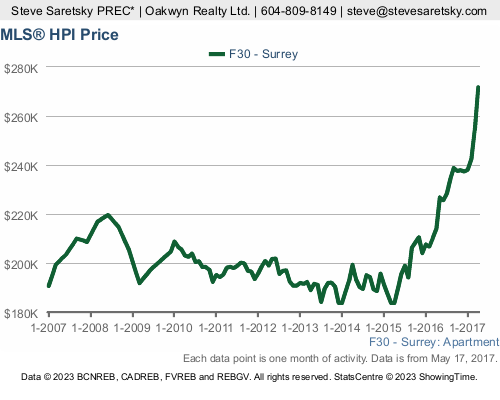 With gains like this, coupled with interest free loans from the BC Government and cheap credit at the cost of inflation it’s no wonder first timers and mom and pop investors are piling into multiple offers blindfolded. This won’t end well, but you might as well get up and dance while the music is still playing.

Interest Rates Do Not Reflect Inflation

Why Subject to Sale is a Bad Idea