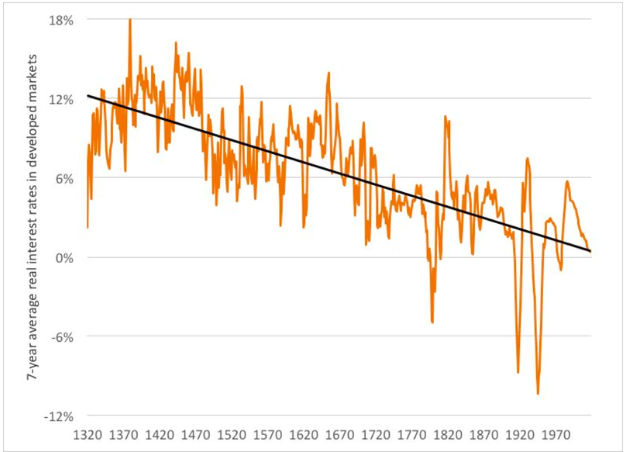 What if negative interest rates weren’t such an unconscionable idea after all? A new report from Yale professor Paul Schmelzing went back in time and studied real interest rates in developed markets over the past 600 years. His findings, were rather remarkable.

Dating back to the 1300’s (don’t ask how he got that data), there is a clear historical downtrend, with rates falling about 1% every 60 years to near zero today. The report includes a literature review that reveals that much prior work on long-term interest rate history was slipshod, little more than anecdotal and that the reliable works are often miscited. Schmelzing compiles copious primary and secondary sources. Rather than concentrating on a single European area, he manages to cover 78% of all developed economies across the globe; and rather than looking only at government debt, he includes private debt and investment in real assets.

A common assumption is that negative real rates are temporary aberrations. But the chart shows they have always been around. In fact, the only extended period in history without them is 1983–2008. Schmelzing argues, drawing a straight line to data does not prove anything about the future, but it does shift the burden of proof. You often hear claims that the “normal” level of real interest rates is 2% to 3%, but the chart suggests the last time 3% was the normal level was 1866. 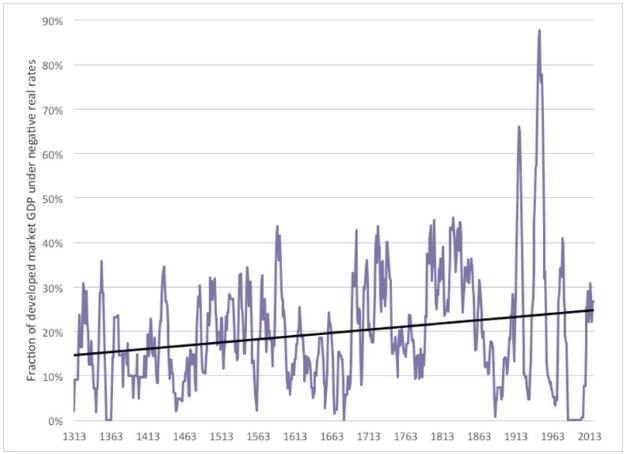 This report doesn’t tell us what’s true so much as challenge what we thought was true. Perhaps we’re not doomed after all…

If real negative interest rates are here to stay it certainly poses questions on how policy makers grapple with the side effects. Predominantly the reach for yield which is siphoning more capital into the real estate market while increasing consumer debt loads.

In a recent speech this past week, Bank of Canada Governor, Stephen Poloz, took to the stage in the city of Vancouver. Cautioning, “Should this housing rebound continue, we will be watching for signs of extrapolative expectations returning to certain major housing markets—in other words, froth. The fact is, the fundamental demand for housing appears to be outpacing our ability to build new homes, which can put renewed upward pressure on prices. It can be very unhealthy when the situation becomes speculative because it can lead to a sudden downdraft in house prices later, with wider implications for the economy.

Stronger housing activity also means more household debt, of course, which continues to be Canada’s biggest financial system vulnerability. The good news is that with the B-20 guideline working to reduce the riskiest borrowing, we are confident that the stock of household debt is becoming less of a threat over time.”

Real negative interest rates and loads of debt- is this all “normal”?